To get around Madrid, Javier Wassmann used to wake up in the morning, grab his smartphone and start searching short-term rental apps to find a ride to work. Then came the coronavirus.

“Now I don’t want to use a car without knowing how long ago someone else was in it, if that person was wearing a mask or perhaps coughed on the steering wheel,” said the 37-year-old engineer in the Spanish capital, where four companies compete for customers with flexible, short-term rentals. “I really don’t need to do it.”

He’s not alone. Such services are suffering from the fallout of the pandemic, with Frost & Sullivan predicting a 25 percent drop in the market this year. Concerns about contagion and city dwellers who are less mobile because they are working from home are combining to sap customers from services once seen as the future of urban transport, especially in Europe’s crowded cities.

The sector was already struggling before the coronavirus as too many companies were competing for the same customers — mainly young people who only need a vehicle occasionally. Globally, more than 15 operators shut down last year, according to Frost & Sullivan.

“Car-sharing as a business model is a tough one to achieve profitability in,” said Shwetha Surender, head of new mobility at the consultancy. “It is not going back to pre-COVID levels immediately. We expect a slow recovery.”

Europe is particularly competitive because of its compact cities and an array of transport options. In Berlin, startup Oply, Europcar Mobility Group’s Ubeeqo and Robert Bosch’s Coup scooter rentals called it quits before the pandemic hit. The fallout has already claimed ride-sharing service CleverShuttle’s operations in the German capital.

Almost 50 percent of Spaniards plan to use short-term rental services less or much less than before, and 8 percent will never use them again, according to a report by consultancy EY-Parthenon.

In Italy, just 1.3 percent of people plan to use such schemes and other mobility services as contagion risk impacts consumer behavior, according to a survey by Moovit, a mobility company recently acquired by Intel.

“We see more people traveling by foot, using their car or their Vespa,” said Yovav Meydad, Moovit’s chief growth and marketing officer. “Less people are using public transportation, probably because of social distancing,” while more will opt for bicycles and scooters.

To lure back drivers, short-term rental companies are adapting by upgrading health procedures and offering a wider array of rental options, including advanced reservations, hourly packages and multi-day bookings. The coming months will be critical.

Zity, a joint venture created in 2017 by Spanish construction company Ferrovial and Renault, has delayed its goal of reaching break-even to next year. If it falls short, its survival could be at stake.
“The precondition for us is still to be profitable in the short run,” said Javier Mateos, Zity’s CEO. “If a project isn’t profitable in the short run, it won’t likely exist in the medium run.”

The company has cut its fares and temporarily extended its service to a larger area, managing to add about 6,000 new users to the 330,000 it had before the outbreak. Still, usage in Madrid was just 70 percent of pre-pandemic levels in late June.

The crisis has implied a six-month delay of its expansion plan, but the goal of operating in as many as 10 European cities in the next two years has not changed.

“Our road map has to be altered, but we’re convinced our model is valid,” Mateos said. “We expect to catch up to numbers comparable to those we reached before the pandemic by September or October.”

It’s not bleak everywhere. Paris’s short-term rental market got a boost at the end of 2019 because of a major transit strike and has since bounced back after lockdowns were lifted, according to David Bartolome, regional business-development manager for Daimler and BMW’s ShareNow.

“Paris is going very well and is one of the cities in Europe where the pandemic has had a really positive impact for us,” he said. “We don’t think customers perceive ShareNow as a health risk. Driving in one of our cars is probably safer than riding an elevator in a tall building.”

For those with deep enough pockets, the shakeout presents an opportunity to grab market share and be in a position to profit from the recovery with fewer competitors around.

In the midst of the crisis, rental company Sixt SE increased its short-term rental fleet by 1,000 vehicles in Germany and expanded outside its home country for the first time, opening in Amsterdam, Rotterdam and The Hague in June and allowing customers to shuttle between the three Dutch cities. 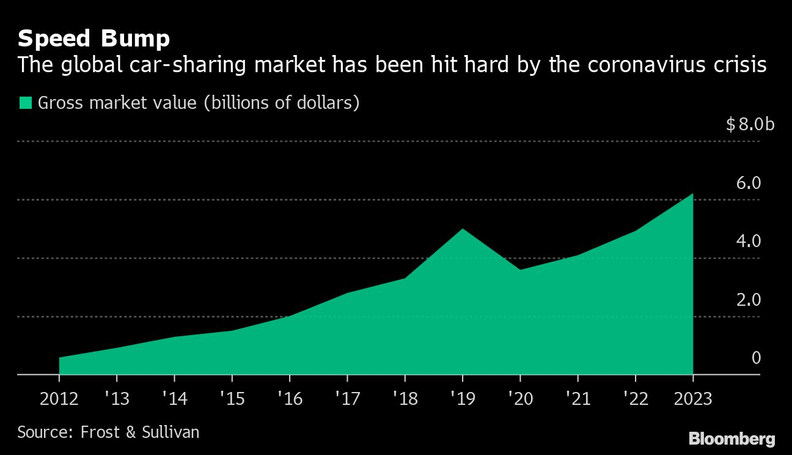 Renault, with its Zity brand, is betting on a similar recovery as the personal car increasingly loses appeal in big cities.

“Our growth trajectory — fast — will remain similar to what it was before the lockdowns,” said Vincent Carre, director of Renault’s car-sharing operations, adding that in major cities like Vancouver, Moscow and Madrid — where the services have been around for years — roughly one third of adults become customers. “We have no doubt about the strength of this business. It’s a deep transformation of society.”

Getting there though will require winning back customers like Wassmann.

“I liked car sharing because it was very quick to use, but now you need to get a tissue to clean the steering wheel, the gearshift, the buttons, everything,” he said. “It may be safe in theory, but I don’t think I’ll be using it again until there’s a vaccine.” 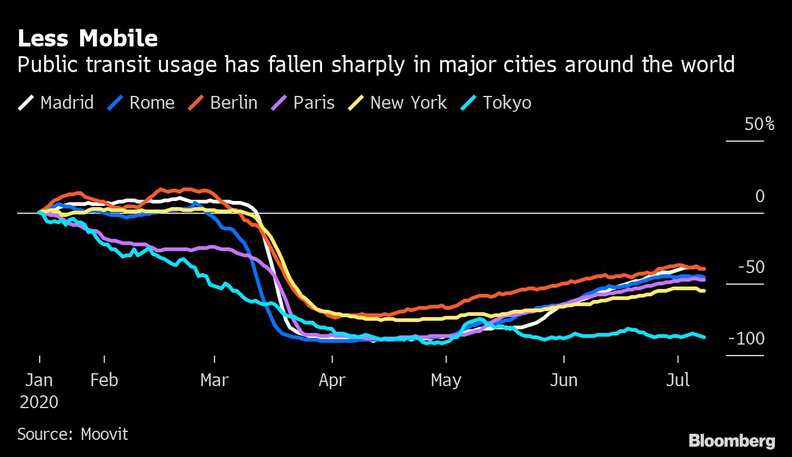